THE SPIDER HOLE Kicks Off Horror Season with Kickstarter Campaign in Support of ‘To The Monsters’!

It’s that time of year for spooks, monsters, and long-legged beasties, and who better to kick it off than Phoenix, AZ based Dark Alternative Rock Band THE SPIDER HOLE? The enigmatic four piece has launched the Kickstarter Campaign to help support their upcoming LP and associated graphic novel, To The Monsters. For fans a little too anxious to wait, they have revealed the debut single, “Skeleton Wedding,” which can be experienced online HERE. 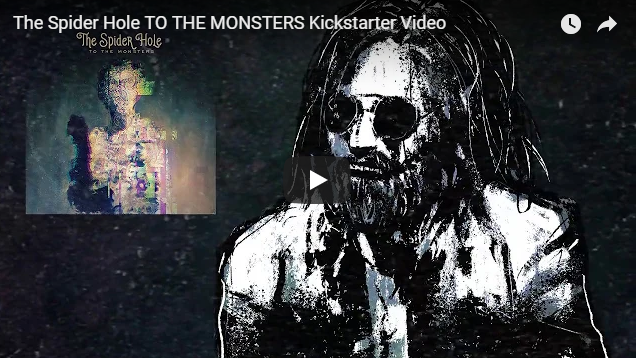 “After four years of great loss, love, and luck, we are returning with a new lineup, a new producer, a new sound, and two incredible new projects: A full-length CD, and an accompanying graphic novel. This is THE SPIDER HOLE as it was always meant to be. Darker. Heavier. Deeper. And weirder. Much, much weirder.” – The Spider Hole 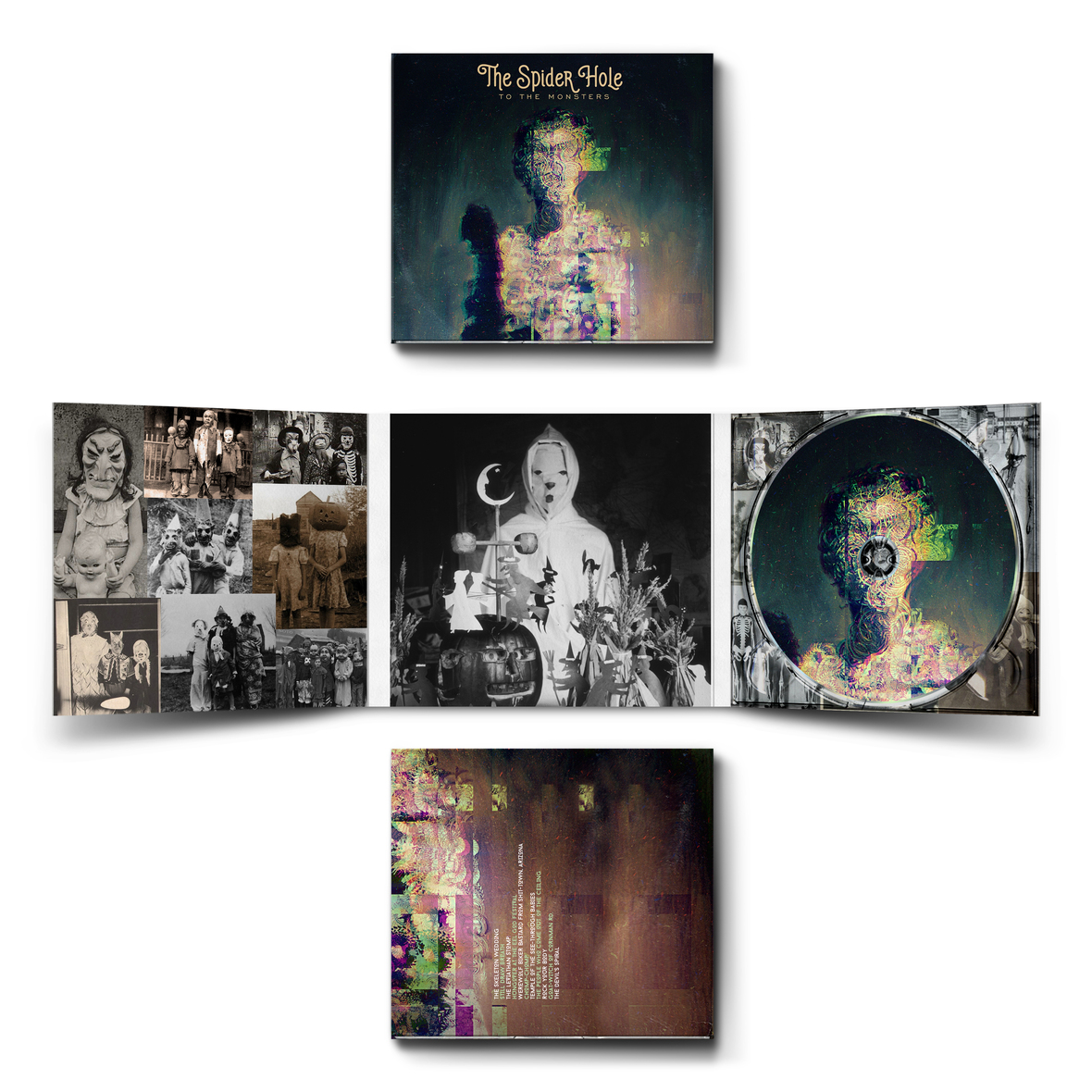 TO THE MONSTERS, our third full-length CD, is an ode to Halloween, weird fiction, and timeless horrors. Featuring eleven brand new tracks devoted to the spectrum of things that go bump in the night, this themed album is at turns whimsical, unsettling, and terrifying. TO THE MONSTERS is produced by rising legend Jeffrey Robens, Jr., and showcases a new direction for the band, one marked by heavier hooks, dark synthetic pulses, strange structural shifts, and unrestrained vocals.

For old fans of The Spider Hole, this album fulfills the promise of our earlier work; for new fans, you have joined us at a most peculiar and exciting time.
Old or new, we welcome you to the show, to the wonder… To the Monsters. 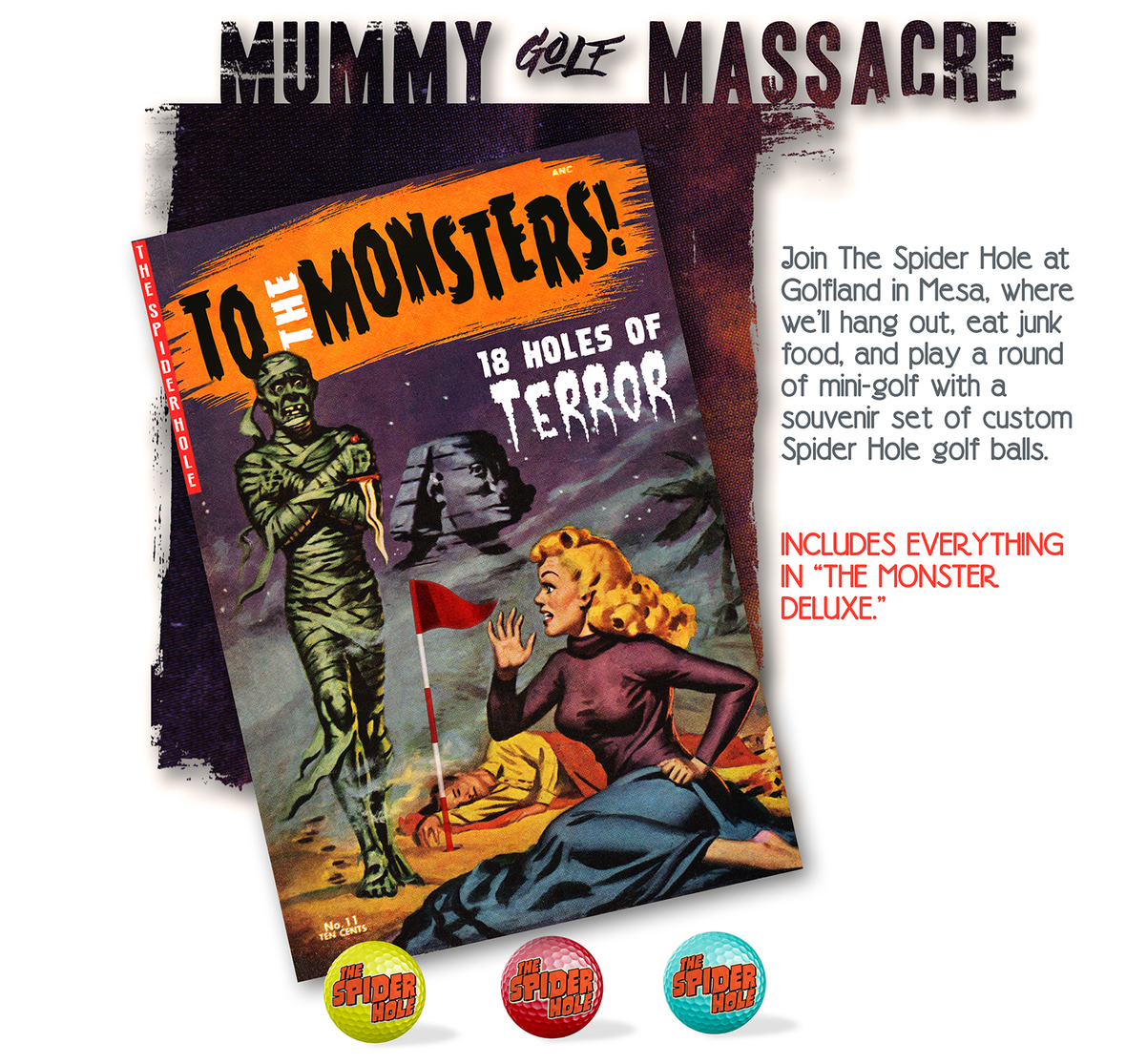 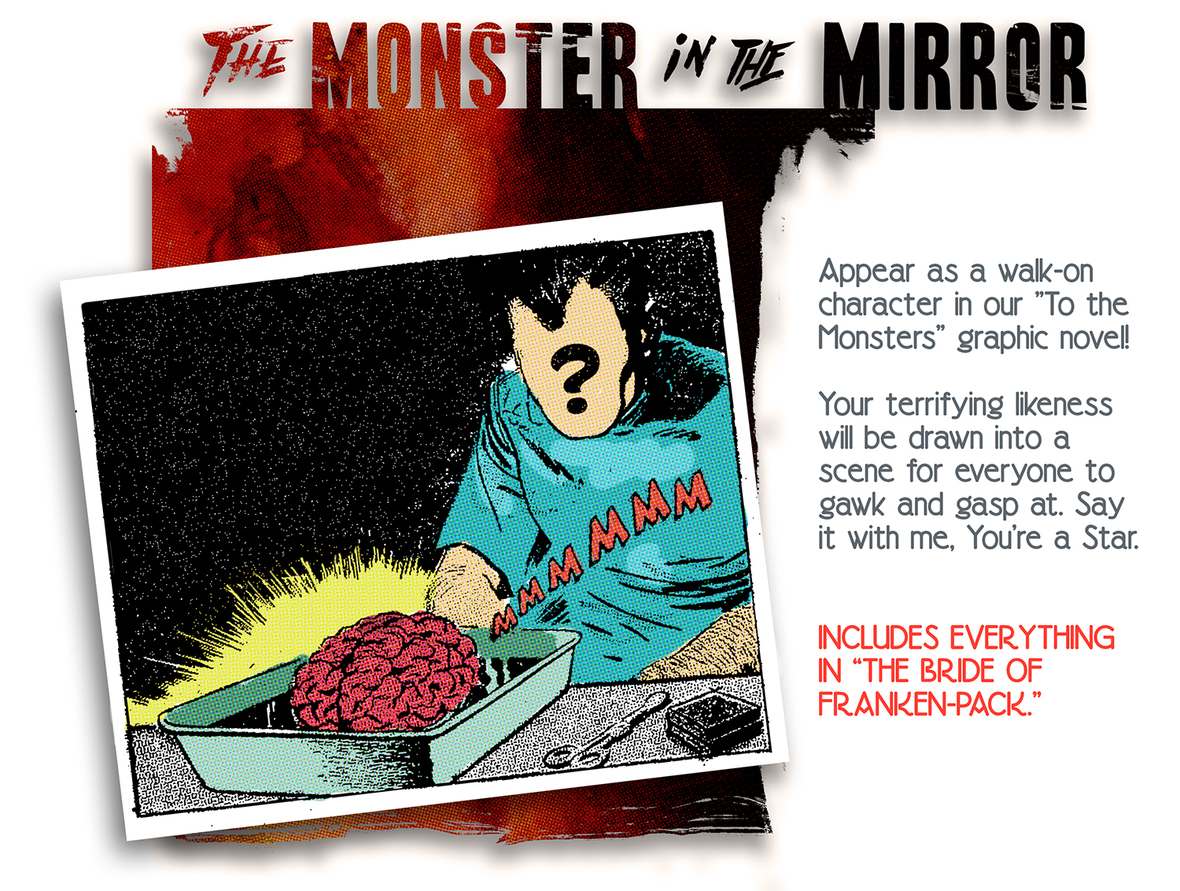 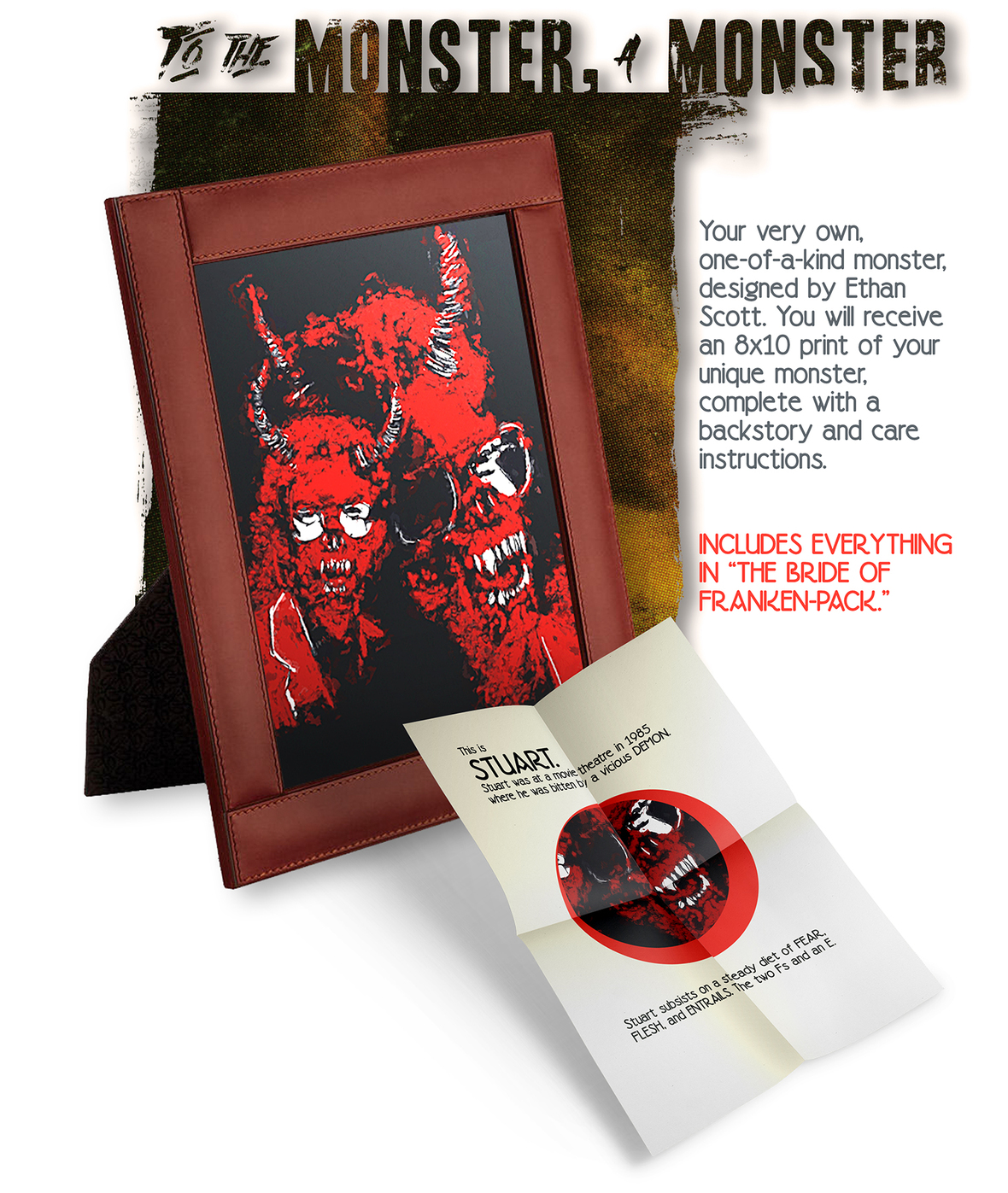 Click HERE to Support The Spider Hole’s ‘To The Monsters‘ on Kickstarter!

A quartet with frequent guest musicians, The Spider Hole performs songs meant to stir brains and rattle bones. Based in sun-scorched Phoenix, AZ, the band started banging sounds together in the late nineties, and has steadily developed an aural stew that is partly rock, partly cabaret, partly blues, and partly goth. Influences include Tom Waits, Oingo Boingo, Siouxsie and the Banshees, Primus, The Pixies, Frank Zappa, The Doors, and your face when you taste something unexpected. New music is being prepped for a new full-length album called To the Monsters, due near the end of 2018.

THE SPIDER HOLE Reveal Debut Single Off of Upcoming ‘To the Monsters’!

Phoenix, AZ based, Dark Alternative Rock Band THE SPIDER HOLE has announced the launch of a Kickstarter Campaign to help support their upcoming LP and associated graphic novel, To The Monsters. The unique project is built around the LP with 11 original songs, each about a different monster, as well as a 100 page horror anthology graphic novel written and illustrated by vocalist Ethan Scott; each story in the novel is about a different band member over the course of one fateful Halloween night.

To celebrate the upcoming launch, the quartet has revealed their first single, “The Skeleton Wedding,” from the album

“We were at The Quarry in Bisbee grubbing and waiting to go on stage when Ethan asks everyone in the band what their greatest fear is. He wants to do a horror anthology comic to put out with the new album. Before we were even called to the stage, all four stories were basically written.” – The Spider Hole

A quartet with frequent guest musicians, The Spider Hole performs songs meant to stir brains and rattle bones. Based in sun-scorched Phoenix, AZ, the band started banging sounds together in the late nineties, and has steadily developed an aural stew that is partly rock, partly cabaret, partly blues, and partly goth. Influences include Tom Waits, Oingo Boingo, Siouxsie and the Banshees, Primus, The Pixies, Frank Zappa, The Doors, and your face when you taste something unexpected. New music is being prepped for a new full-length album called To the Monsters, due near the end of 2018.

Horror themed, theatrical scamp rock band Fable Cry has announced the story-line of their upcoming, highly anticipated third album. Although as yet unnamed, the band has revealed an incredibly complex and imaginative outline that promises fans yet another seamless fusion of top notch musicianship and dramatic storytelling. The album is set to release Spring 2018, but fans can look forward to a taste with the release of the first music video in October, just time for Halloween!

We’re working on third full length album: a conceptual based in the post-prohibition 30’s, in a world where bootleggers have traded in their skills of smuggling alcohol, to smuggling blood and selling it to a secret underground network of Vampires. The story follows a young, would-be starlet, who’s attempted murder leads her to seek help from the members of the most infamous, blood-loving speakeasies known simply as “The Joint”. She soon finds that the leader among them has similar interests of revenge, and they must band together to give this killer what he deserves… Wrapped in mystery, seduction, greed, and gore, the tale asks: If you could pay the price, what would be so wrong with embracing your darker side? – Fable Cry

I love when I come across a band that infuses horror into their sound and overall image. Such was the case when I was tipped off to to a band called Fable Cry, who describe their sound as ‘theatrical scamp rock’. It’s a bit macabre and quirky, with the quirky part being a good thing, and their new video for ‘Dead Or Alive (For Now)‘ looks like it belongs in smack dab in the middle of a Tim Burton movie. I dig the old school horror visuals in the video and I’m not ashamed to admit I was more than creeped out by the cello player.– Dirty Horror

This is a band that brings to life colorful and imagery through their use of cello, violin in addition to an array of non traditional rock instruments. Their vaudevillian style is almost like a fusion of Foxy Shazam, Queen and Danny Elfman and their refreshing sound is quickly garnering a lot of great attention. – Music Junky Press

On to the music we go, and I want to start by talking about “Fancy Dancing”. This track, and almost the entire album, would be perfectly at home in any Tim Burton movie, and I absolutely love it. It’s as if Danny Elfman had sat down to write the song with them. If I understand the lyrics correctly, and I think I do, the song is about a dead man, traveling the road of the dead who meets a witch, and she ends up telling him, upon his asking, “I saw you dancing, I saw you dancing fancy”. At the end of the song he comes to a tree, and sees a man dangling from a tree, dancing fancy. He sees that the man looks just like him, and is him; being hanged, dying. I love the lyrical play in this song, as it obscures what is happening by using metaphor in the title of the song. It’s been said that people who are hanged do a little “dance” as they die, their feet kick and move about until they are dead, hence the metaphor of “Dancing Fancy”. – Chimera Magazine

Their story began when Zach Ferrin first started putting his imagination to song. The year was 2010, and he was determined to take the music, art, and stories he had been cultivating to one great platform where he could share them, with the intent to wrap it into one bundle of entertainment for the masses. He and and his sister, former member Kirstie Ferrin, had half of what would become their first album written before they would have a title by which to call themselves. The songs were all rambunctious, melodic, and wrapped in themes of loss, love, hate, and triumph playfully told through tales of legend and myth. “Fable Cry” was born, and in 2011 they self released their self-titled debut album. Between the two of them they played guitar, violin, accordion, drums, bells, kazoo, ukelele, banjo, and cello, and they tried their best to include as much of it as possible in their live shows, along with humorous intros, crowd participation, and twistedly playful “Story Time” between songs.

By the end of 2013, after 4 elaborate music videos, several national tours, and lots of writing, Kirstie left and Zach decided that it was time to expand Fable Cry and build a band that could properly play these songs that were too big for him alone. That void was soon filled by classically trained violinist and vocalist Jo Cleary, and longtime friend and bass aficionado Scott Fernandez, with a revolving door of others who would help bring this ever-growing monster new life. They immediately hit the studio to record and release their first single/music video together in the Autumn of 2014 entitled “Fancy Dancing.” Now performing as a full band, they could execute the songs the way they had always been written, packed with energy and dynamics, while maintaining (and inevitably amplifying) the band’s theatrics, elaborate wardrobes, makeup, and overall ruckusness. They spent the next few months writing and recording what would become their Sophomore album, filled with songs inspired by life through classic horror tales and originally spooky themes entitled We’ll Show You Where the Monsters Are. After two more music videos to precede the album, it was released on August 25th, 2015.

In January 2016, they hit the new year running by releasing their eighth official music video for “Dead Or Alive (For Now).” Later that year, Nic Giordano would officially join Fable Cry on drums, and they would spend the rest of the year playing local and regional shows, festivals, and variety shows.
In 2017 they began writing their third album, a conceptual vampire gangster epic placed in the 1930’s. With an ever expanding sound, they recruited the multi-talented Melody Ryan to assist on keys, flute, guitar, and vocals.

With a colorfully haunting melody and a flourishing sweep of the hand, Fable Cry will weave their strand of tales, inviting you to come along with them and embrace your darker side. They create a wildly unique experience and one that is not to be missed!

Fable: A fictitious narrative or statement. A legendary story of supernatural happenings.

Cry: To scream. To utter a characteristic sound or call. Cry havoc. To give alarm without occasion. Proclamation. A pack of hounds. To cry out with such gusto.